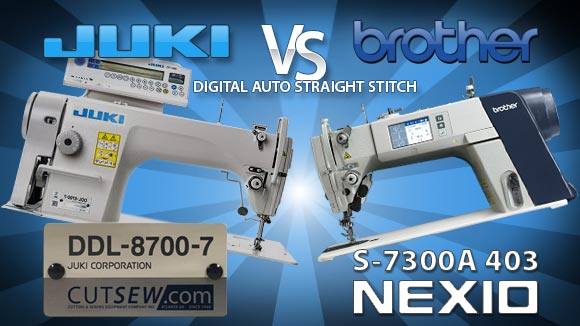 Why is the price tag different if the machines are so similar?

If you have been considering an automatic, digital lockstitch there is no doubt you have looked into the Juki DDL-8700-7. Most likely you have also come across the Brother Nexio S7300 as well. These two machines are very similar, but even if a 10-15% cost savings isn’t a major consideration in your decision, you’ll want to take a good look at the Brother S7300. Both brands are both made for lightweight to medium weight applications. The sewing speed, foot lift, and most automatic features are the same in both machines. The Nexio does offer a few more features that the Juki doesn’t have, but they are essentially the same offering from the two sewing machine giants. However, if you think about the main positions between the two corporations that produce them, the price difference starts to make sense.
As you know, Juki makes sewing machines. They have been making industrial machines since 1938. A global corporation, headquartered in Japan, Juki makes Industrial, home, and semi-industrial sewing machines. Juki’s sole focus is on sewing machines. Any other product they have made has been to further the technology of their sewing machines – such as their control boxes. In terms of how Juki operates, let’s talk about cars, think of a BMW. They are well-engineered and focus only on cars. They make great cars, not trucks, and you pay a high price for their history of excellence. Juki has had a similar narrow focus throughout its history and carries a reputation of reliability and performance. In fact, Juki is ranked as the number one sewing machine manufacturer in the world. They offer several hundred sewing machine models at any given time, whereas Brother offers only a few dozen.  Juki thrives on innovation in the industrial sewing market, whereas Brother chooses to make a handful of really well designed and built models.
Brother Industries, which also started in Japan, offers about 9 major electronic devices making their annual revenue in the billions. From computers and printers to domestic appliances, Brother has a large offering of products both in industrial and domestic markets. If we are still thinking in terms of automobiles – Think Mercedes. A manufacturer who has produced anything from cars, sprinter vans, busses, semi-trucks, pick-up trucks, box-trucks, taxi cabs and cargo vans. Mercedes has figured out how to place their high-quality motors into a variety of automobiles. With this broader offering of products, it’s smart to think about the similarities of the products offered. In the case of Brother products, they are all electronics. What started off as a sewing machine company, diversified into an electronics maker by the 1960s. Over the last several decades, they have advanced in smooth operating electronic parts working in conjunction with well-designed hardware. However, the main focus of the corporation from its very beginning has been mass production. Brother is a world leader in mass production. Because of this focus, they only design the most sought after products within their range of expertise. Consider their sewing machine, and electronics experience, their limited number of sewing machine models, then consider their leadership in global production and you get the formula that can offer the S7300 Nexio at a more affordable cost.
In addition to the cost difference, there is an overall different experience in the feel of the machine operation. Juki is known to have, a more rigid, and mechanical feel. Whereas, the Brother Nexio line seems almost fluid it in its’ movements. It’s the same type of parts, producing the same kind of stitch but the difference feels like driving a luxury car versus driving a sports car.  In many cases, mechanics will agree that the Juki will last longer. However, both of these automatic machines are of the highest caliber.  It really is just a question of your values when it gets down to it. Do you want the champion name of all industrial sewing, or do you want a champion when it comes to this particular type of machine? Brother cannot offer the huge quantity of machine styles that Juki does, however, in the case of the automatic single needle, their pursuit of perfection really shines.
SHARE THIS POST
Previous Post
Next Post